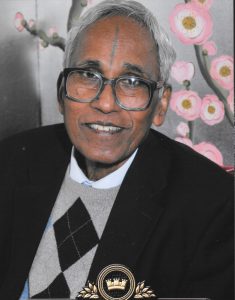 TNF Past President, Dr. Raman Pichumani (February 10, 1929 –February 10, 2019) passed away on his 90th birthday in Plano, Tx. Dr. Pichumani was one of the early life members of TNF and served the organization in various capacities, including as President during 1989-90. It was during his term as President, the trustees for the Chennai Chapter were appointed to complete the TNF Technology Center.
Dr. Pichumani is survived by his wife of 63 years Mrs. Balamani, a son, two daughters and two granddaughters. He is from Attur, Salem District, and graduated from the College of Engineering, Guindy in 1952. He was awarded a Government of India scholarship and came to the US in 1956 and obtained a M.S. and Ph.D from Carnegie Tech in Pittsburg, as it was known at that time. He went back to India and worked for the government. His notable civil work in India was extending and hardening the airport runway in Bombay to handle large jets. He held various positions in the US on his return but worked for a long time as a subject matter expert on nuclear power plant foundations at the US Nuclear Regulatory Commission.
“Dr. Pichumani was a visionary and a honest man with kind heart. He always used a peaceful approach to address the challenges that faced TNF.” – A.M. Rajendran, Past President, TNF
“Dr. Pichumani mentored many, including me, in serving TNF and instilled in us the value of giving back to the community, without expecting anything in return.” – Daivamani Sivasailam, Past President, TNF

Sign up for our newsletter to stay informed about TNF activities

Tamil Nadu Foundation is a nonprofit foundation created in 1974 by a group of Americans of Tamil origin who wanted to help people from their native province of Tamil Nadu in India.