Chengalpattu is the newly bifurcated 37th district of Tamil Nadu. The district is named for the beautiful lily flowers called ‘chenkazhuneer poo’ that blooms  in the ponds.

Chengalpattu dates from the early Chola dynasty of the 2nd century BCE. Chengalpattu was formerly a capital of the kings of Vijayanagara.

The district includes Tambaram which has become a major junction for the Indian Railways,  Mamallpuram – which boasts the beautiful shore temples by the Pallava king  Narasimha Varman and has been declared as a UNESCO World Heritage SIte of 13,500 BCE monuments. Vedanthangal a beautiful bird sanctuary where birds from all over the world arrive to nest.

Aringar Anna Zoological Park in Vandalur is a great place to visit.

The surrounding district was home to cotton and silk weaving, indigo dyeing, tanneries, and a cigar factory. 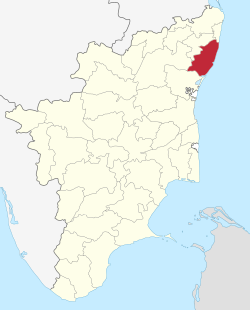