Thiruvarur was the capital city of the Chola Kingdom. Originally part of the Thanjavur district, it is situated in the Cauvery river delta and has rich paddy fields, coconut groves and mangroves.

The city of  Thiruvarur has been  written about in Tamil literature by  the seventh to eighth century saivite poets Sambandar, Thirunavukkarasar and Sundarar. Religion and arts thrived in the region which has many beautiful temples and a seven hundred year old dargah in Muthupettai. The pillars of carnatic music,  the trinity, consisting of  Thyagarajar, Muthuswamy

The famous poet  Arunagirinathar dedicated his  songs “ Thirupugazh” to Subramanya Swamy in the temple in Enkan. The many ancient temples at Mannargudi, Koothanur, Alangudi, Valangaiman and Thiruvarur draw  thousands of visitors every year.

The Vaduvoor bird sanctuary and the Udayamarthandapuram Bird Sanctuary attract many migratory birds such as the Grey Pelicans, many types of  herons, spoonbill, white ibis , open bill stork and many others. 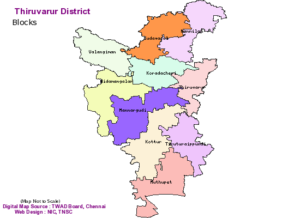 TNF Houston Chapter has adopted Thiruvarur as the sister district. The chapter supports the ABC Initiative in six schools in the district since 2015. The district has a high literacy rate. However, the students in the underserved areas deserve more help.