Thanjavur is known as the “GRANARY OF SOUTH INDIA”.

Thanjavur District with its fertile  soil is one of the largest  paddy cultivation areas not only in Tamilnadu but also in South India.  Thanjavur district is also  called as  ‘The Rice Bowl of Tamil Nadu’ as the main industry is agriculture. The Cauvery River is the main source of water in  the district. The district is a  historical place and was  ruled by Cholas, Nayak, Marathas and the British. Thanjavur has many historic buildings and monuments such as  the Grand Anaicut, Big Temple and Sarofoji Mahal Palace and Saraswathi Mahal Library.

The Thanjavur Maharaja Serfoji’s Saraswathi Mahal Library is one among a few libraries in the world with texts of the medieval period. The library has a rare  and valuable collection of manuscripts, books, maps and paintings on all aspects of Art, Culture and Literature. The Encyclopedia Britannica, in its survey of the Libraries of the world, describes it as “ the most remarkable Library in India”.

The Brihadeeshwarar Temple is an architectural marvel! It is said that the shadow of the building does not fall on the ground! The temple is a UNESCO World Heritage Site. The stunning temple was built by Rajaraja Cholan around  1000 AD.  A visit to the district is not complete without visiting the “Big Temple”. The Tamil University was established in Thanjavur to provide higher research in the Tamil language and advanced study in allied branches such as linguistics, translation, lexicography, music, drama and manuscriptology.

The district is known for the “Saraswathi Veena” Thanjavur art plates, and the Thanjavur “Thalayatti Bommai”  dolls of rolling figures made of clay and painted in bright colors. More than two third of the district’s population live in rural areas. 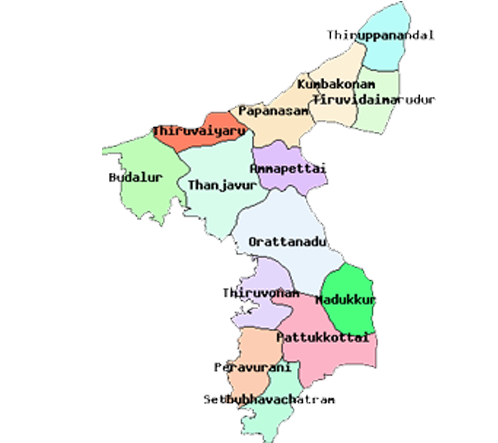 To establish the ABC Initiative in the underserved areas of the district. Donate generously to Thanjavur district!