Tirupattur district, one of the 38 districts of Tamil Nadu was formed in the last quarter of 2019, by trifurcation of Vellore district. The town of Tirupattur is the headquarters of Tirupattur district and it is known for its reservoir of fine sandalwood in the trailing mountains around it. The name Tirupattur means a group of 10 villages/ small towns. Tirupattur is well connected by roads and rails to important cities in Tamil Nadu such as Chennai, Coimbatore, Salem and Thiruvannamalai and Bangalore in Karnataka.

Tirupattur district is rich in mineral deposits, and there are many large and medium scale leather industries making both leather articles and finished leather in Vaniyambadi and Ambur, two towns in the district.  Agriculture is the main occupation in the district. Tirupattur is known as the “ City of  Sandalwood” as it is the major trading center for sandalwood which is cultivated in the region

Asia’s biggest solar observatory, Vainu Bappu Observatory (VBO) operated by Indian Institute of Astrophysics is located in the picturesque village of Kavalur in the Javadhu hills. Front line astrophysics research is being carried out in this observatory with the help of the optical telescopes located here.  The observatory hosts a 1 m Carls Zeiss Telescope, 1.3 m J.C. Bhattacharya Telescope, and the 2.3 m Vainu Bappu Telescope.

Yelagiri, located  on the Vaniyambadi – Tiruppatur road  a hill station at an altitude of 3500 ft in Tiruppatur district is a tourist attraction with orchards, rose gardens and green valleys. The magnificent Jalagamparai waterfalls near Jadayanur created by the river Attaaru running through the valleys of Yelagiri Hills is another tourist attraction in Tirupattur. 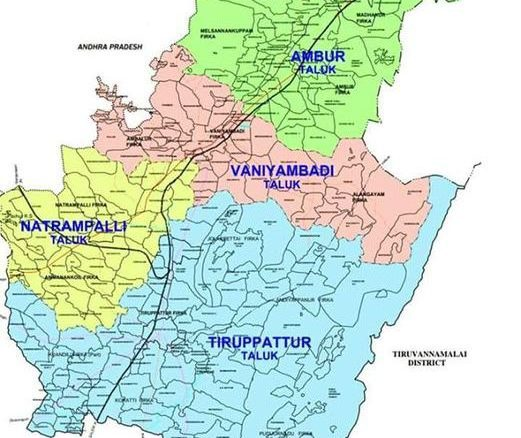