Krishnagiri is a land of wise scholars, men of valour and courage, blessed with the green valleys, hills and hillocks and inhabited by people known for innovative farming. This district is gifted with black granite hillocks and named as “krishnagiri”.  The Eastern part of the district experiences hot climate and Western part has a contrasting cold climate. Three languages namely Tamil, Telugu and Kannada are predominantly spoken in this district.

The Krishnagiri district has prehistoric importance. Archeological sources confirm the presence of habitats of mankind during the Paleolithic, Neolithic and Mesolithic Ages. Various rock paintings and rock carvings of Indus Valley civilization and Iron Age seen in this district.This region was ruled by Pallavas, Gangas, Nulambas, Cholas, Hoysalas, Vijaya Nagar Emperors, Bijapur Sultans, Wudayars of Mysore and Nayaks of Madurai.

Agriculture, horticulture, sericulture, are major industries in the district.

The district is a paradise for natural lovers. The flora include a variety of timber trees like Rosewood, Teak, Sandal etc. Hundreds of medicinal herbs, minor forest plants like nelli, kadukkai, cheekai, pungam etc are found in the district. The hills and forests in the district are known for elephants, deer, tiger and the lakes attract a large number of migratory birds such as the Painted Stork, Paradise fly catcher etc.  Kodakkarai shoal forest  is known for large scale migratory butterflies during a particular season when one can observe thousands of migratory butterflies passing through this forest like a passing cloud.
Cauvery and South Pennar River flow in the district  and the falls in Hoganekal is a famous tourist attraction.

The literacy rate in Krishnagiri is 72% well below the national average of 84%.

Current Projects in the district: Scholarships to two students by Esvee Foundation 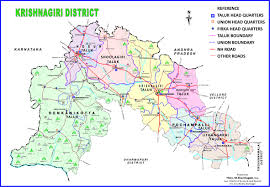 Future plans: TNF has plans to start the ABC project in seven schools in the district in 2021.

Please donate generously to Krishnagiri district  to help the underserved people in the district!

With your help TNF can implement the following projects in the  Government schools in the district: