Please donate generously to start the district fund for Mayialaduthurai

Mayiladuthurai district, the 38th district of Tamil Nadu was formed on March 24, 2020 when Tamil Nadu government bifurcated Nagapattinam district. The district is bounded on the north by Cuddalore district near Kollidam river, on the south by Thiruvarur district near Kollumangudi, on the west by Thanjavur district near aduthurai, on the east by the Bay of Bengal and on the southeast, near Porayar by Karaikal district  of the union territory Puducherry. Mayiladuthurai has many geographical resources, Kollidam and Kavery rivers flow here, flora and fauna like endangered species are also in protected areas of Kollidam.

Mayiladuthurai is a major town in Mayiladuthurai district and the headquarters of the district. The town is located at a distance of 281 km from the state capital, Chennai. Tourism plays a key economic role for the town even though Agriculture, fishing & sugar/rice factories is the major occupation. Mayiladuthurai district is a sorted place for spiritual tourism, as there are a number of temples in and around Mayiladuthurai like Vaitheeswaran Temple and Mayura Natha Swamy temple in Mayiladuthurai, Sri Amirthakadeswarar Abirami Temple in Thirukadaiyur, Udhvaganathar Temple in Thirumanancheri, Sattainathar temple in Sirkazhi. The Danish fort called Fort Dansborg in Tharangambadi in the shores of Bay of Bengal is a place of historic interest and it is used as a museum where the major artifacts of the fort and the Danish empire are displayed.

Puhar (also known as Poompuhar) is a town in the Mayiladuthurai district and it was once a flourishing ancient port city known as Kaveri poompattinam, which for a while served as the capital of the Early Chola kings in Tamilakam. Puhar is located near the endpoint of the Kaveri river, aside from the sea coast.  It has now been established by marine archaeological research (conducted by the National Institute of marine archaeology, Goa) that much of the town was washed away by progressive erosion and floods. In the 1960s and 1970s, archaeological researches were conducted and submerged wharves and several meter lengths of pier walls excavated in recent times have corroborated the literary references to Poompuhar. It was rebuilt several times after that. Ancient Pottery dating back to the 4th century BCE has been discovered 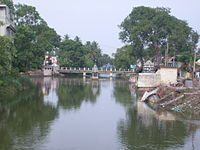 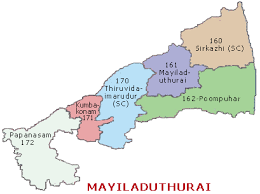