We have a very long way to go!

The  well developed and industrialized Tiruppur district was carved out of Coimbatore and Erode districts in Feb 2009. The Tiruppur banian industry, the cotton market, Kangeyam bull and the famous Uthukkuli butter, among other things, provide for a vibrant economy. The major rivers flowing through the district are Noyyal and Amaravathi.  Amaravathi dam and Thirumurthy dam are the prime source of irrigation in the district.

The city of Tiruppur, also known as knitwear capital of India, located on the banks of Noyyal River is the administrative headquarters for the district. Tiruppur has been ruled at different times, by the Early Pandiyas, Medieval Cholas, latter Cholas, Mysore Kingdom and the British. The city is a major textile and knitwear hub contributing to 90% of total cotton knitwear exports from India. The textile industry provides employment to over six lakh people and contributed to exports worth ₹200 billion (US$2.8 billion) in 2014–15. There are over 10,000 garment manufacturing industries in Tiruppur, employing over 600,000 people and the cotton knitwear sent from here are in much demand in European countries. The garment industry employs many women.

Sukreeswarar Temple, is a 10th-century temple and is considered one of the four Sirpa Sthalangal in Kongu region. Some of the popular tourist locations outside the city are Sivanmalai, Thirumoorthy Hills, Amaravathi Crocodile Farm, Nanjarayan Tank, Koolipalayam wetlands, Thirumurugan poondi, Konganagiri hill hock temple,  Avinashilingeshwarar temple and Vazhai Thottathu Ayyankovil.

Overall Tirupur has a 78% literacy rate. However, the literacy rate of the children in the Government schools and in villages is below 60%. With your help TNF can implement the ABC Initiative and improve the lives of the underserved children. Please donate generously to Tiruppur district. www.tnfusa.org/donate 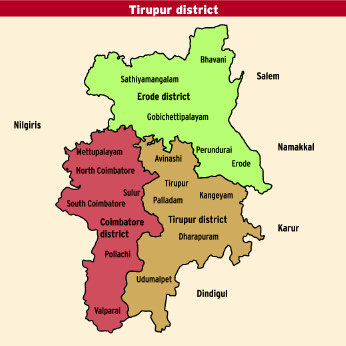