Beautiful waterfalls, perennial streams, majestic hills, and  plains for agriculture make Theni a unique district. Bifurcated from Madurai district in 1996, the region was sparsely populated until the Mullaiperiyar dam was built in 1886.

The history of the district dates back to Veerapandi of Pandya dynasty who built the 14th century Gowriamman Temple in the district.

Agriculture is the main economic activity in the district. Rice. millet, sugarcane, cotton, coffee, tea, cardamom, Muscat grapes  and Thompson grapes are grown in the district. Bodinayakanur is a major trade center for coffee, tea, cardamom and black pepper. It is known as “Cardamom City “ because of the large quantity of cardamom that is traded here.

The district has many tourist places such as Megamalai, the cascading Suruli Falls, Mangala Devi Kannagi Temple in Idukki district of Kerala, Megamalai Chinna Suruli and Kumbakarai falls.

Currently TNF has no projects in the district. 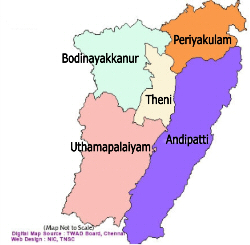 How can you help? Be the change!

Donate generously to Theni District  to create projects in Theni!

With your generous donations TNF implement   the following projects in the Government schools in the district: