Kanyakumari district lies at the southernmost tip of the Indian peninsula, where Indian Ocean, Arabian Sea and Bay of Bengal confluence. It is surrounded by Majestic Hills and the plains bordered by colorful sea-shores, fringed with coconut trees and paddy fields. It is the smallest district in Tamil Nadu with a land spread of 1,684 sq. km. has almost all ecosystems – forests, wetlands, freshwater resources, marine, etc. Even though it is the smallest in terms of area, the density of population is the highest 1119/Sq.Km in Tamil Nadu next to Chennai. Kanyakumari stands first in literacy in  Tamilnadu.  It is the only place in the entire world where one can witness both the rising and setting of the sun. Fishing and Agriculture is the main occupation. It has 42 fishing villages along the coastline .The fishing population of the district is 143388 with 73471 men and 69917 women. The socio-economic conditions of the fisherman in the southern coastal areas of Kanyakumari District are very poor. The District is industrially backward with only  six major industries. However, there are a variety of small scale and cottage industries.

Vivekananda Rock Memorial is a popular tourist monument in Kanyakumari. It was built in 1970 in honor of Swami Vivekananda who is said to have attained enlightenment on the rock. According to local legends, it was on this rock that Goddess Kumari performed tapas in devotion of lord Shiva.

Padmanabhapuram Palace, which dates back to 1600. The palace is said to be the largest wooden one in Asia. Its craftsmanship and architecture are admirable, especially the detailed woodwork on the walls and ceilings. The palace complex is spread over more than six acres within a fort and has a museum.

The Mathoor Hanging Trough is the tallest as well as the longest trough bridge in Asia, having a height of 115 feet and a length of one kilometer. This aqueduct is built across the Parali river, a small river that originates in the Mahendragiri Hills of the Western Ghats. Mathoor Aqueduct itself carries water from one hill to another, for a distance of close to one kilometer.

The  Suchindram Thanumalayan Temple, is famous for its eminent figures and brilliant stone building design.It was built  in the seventeenth Century, and has four 18 feet (5.5 m) tall  musical columns, manufactured from a solitary stone. When these musical columns are struck, they discharge pleasant musical notes. 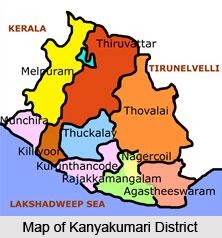