Karur district is located in Central Tamil Nadu and was bifurcated from Tiruchirapalli in 1996.  The Cauvery river and Amaravathi river flow in this district. Karur district is rich in mineral deposits and granite is mined here. The city of Karur is famous for its handloom and bus body building industry. The district also has several cement factories. Agriculture, Bagasse Paper, nylon fishing nets, gem stones are the other industries in the district. However, the  district is world famous for home textiles and boasts of exports to major US companies such as Walmart, Target, etc.

Karur District has a very long history and has been sung by many poets of Sangam period. It has been the battle ground of various Tamil Kings like Chera, Chola, Pandya and Pallavas because of its strategic location. Archaeological and Literary evidence has proved beyond doubt that Karur was the capital of early Chera Kings of Sangam age. There has been a plethora of rare findings during the archaeological excavations undertaken in Karur. These include mats, designed pottery, bricks, mud toys, Roman coins, Chera Coins, Pallava Coins, Roman Amphorae, Russet coated ware, and rare rings etc. The Tamil Epic Silapathikaram mentions that the famous Chera King, Cheran Senguttuvan, ruled from Karur. The district has been ruled by Pandya, Pallavas, Cholas, Naickars, Tippu Sultan and finally the British Empire.

The district has a very rich and varied cultural heritage. The name may have been derived from Karuvur Thevar, one of the nine authors of Thiruvichaippa, who lived during the reign of the great Raja Raja Cholan-I.

The literacy rate in Karur district as  per Census 2011 is 75.65% which is below the national average of 84%. There are more than 800 State Government, Municipality and Govt. Aided Schools in Karur. 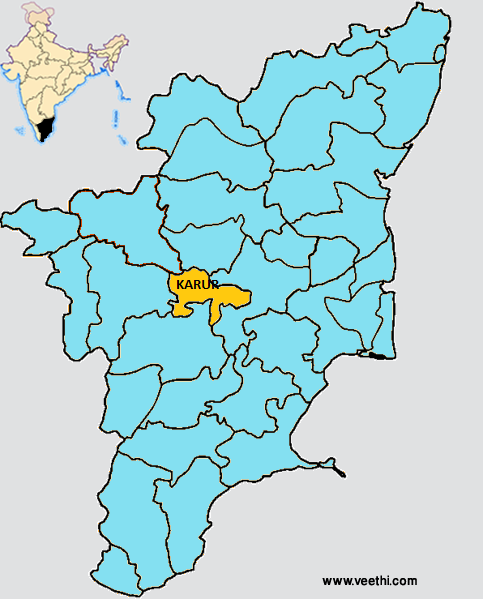