Tiruchirappalli, also called Tiruchi or Trichy, is a major tier II city in the Indian state of Tamil Nadu and the administrative headquarters of Tiruchirappalli district. It is the fourth largest city as well as the fourth largest urban agglomeration in the state. Located 322 kilometers (200 mi) south of Chennai and 374 kilometers (232 mi) north of Kanyakumari, Tiruchirappalli sits almost at the geographic center of the state. The Cauvery Delta begins 16 kilometers (9.9 mi) west of the city where the Kaveri river splits into two, forming the island of Srirangam, which is now incorporated into the Tiruchirappalli City Municipal Corporation. The city occupies an area of 167.23 square kilometers (64.57 sq mi) and had a population of 1,164,668 in 2020.[a]

Tiruchirappalli is one of the oldest inhabited cities in India. Its recorded history begins in the 3rd century BC when it was under the rule of the Cholas. The city has also been ruled by the Pallavas, Pandyas, Vijayanagar Empire, Nayak Dynasty, the Carnatic state and the British. The most prominent historical monuments in Tiruchirappalli include the Rockfort, the Ranganathaswamy temple at Srirangam and the Jambukeswarar temple at Thiruvanaikaval. The archaeologically important town of Uraiyur, capital of the Early Cholas, is now a neighborhood in Tiruchirappalli. 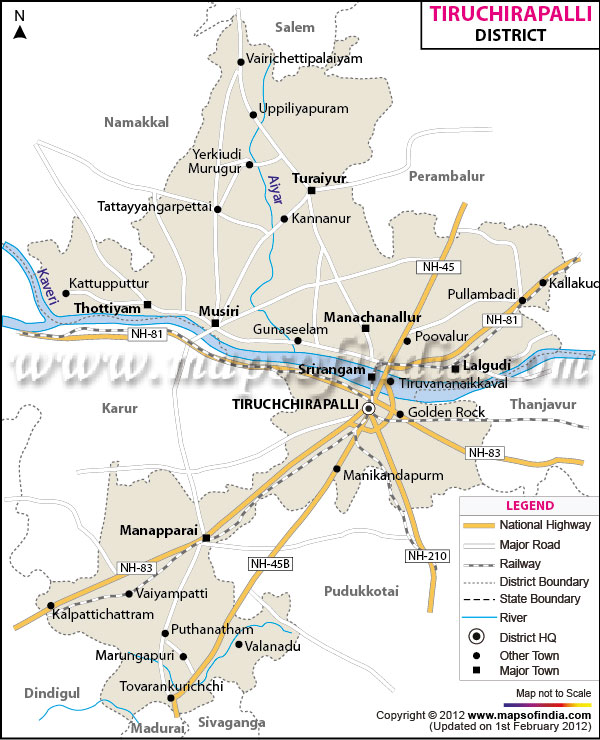 TNF Summer 2019 Intern Shanthi Bhaskar has raised funds to set up a library, improve the IT Lab, and give a facelift to the girl’s restrooms  at the  Arasangudi Government Higher Secondary School near Trichy. The total cost of the project is $ 10,000. Shanthi received the 2020 TNF TAYMAI Grant Award of $1000 towards the project. she has raised $5800 so far